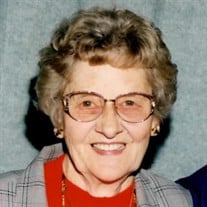 Doris Elaine Wlozinski is the second of three daughters born to Anthony and Edna (nee Sax)on November 3, 1920.   At the age of three, she lost her mother pushing her  younger sister Laverne in a baby carriage.  She grew up in College Hill on Homeside Avenue. Attended St. Clare Elementary School. She graduated from Our Lady of Angels in 1938, where she went to school with Doris Day.   She married George Johnson on September 3, 1939. They lived on Homeside Avenue in the house that her father gave them, and had their first three children.   Barbara Jean, who was in the last high school graduating class at St. Gabriel in 1958.  Thomas George and John Edwin,   whom they sent to Roger Bacon like their father, George. In 1945 they bought what would become the homestead  on State Route 747 in Port Union, Ohio.  It was here that they owned and operated The Port Union Grocery Store, D&L Trailer Sales, and DO Ceramics Studio.   In 1962, when Doris was 41 years old, she had her fourth child, Candace Marie.  Doris was very active with her church, St. Gabriel, Glendale.  In the 1970’s when the ceramic studio upgraded their kiln, she donated the old one to St. Gabriel school, thus starting the school’s ceramic program.  She also volunteered at the church festival where one year she suggested maybe instead of having the same old coleslaw, we could try a new vinegar and celery seed coleslaw. With some skepticism  she talked them into it. In 1980, after their youngest child Candace graduated,  they bought 5 acres of land from George’s uncle Edwin in Oldenburg Indiana, built a house on it, and retired happily.  In 1996 they returned to Cincinnati. In 1998, when the house next to Candace went up for sale,  they purchased it.  Doris’ sister Laverne, husband George and son John  preceded her in death Doris was the beloved wife of the late George E. Johnson. Dear mother of Barbara (the late Lawrence) Cox, Thomas (the late Diane) Johnson, Candace (Mary Hope Fay) Johnson and the late John (the late Ann) Johnson. Loving grandmother of Diana, Anthony, Tim, Shelli, Michael and great grandmother of Ian, Tyler, Ariel, Alexandria, Lauren, Nathan and Amber. Dear sister of the late Helen Schwegman and Laverne Wood. Passed away Saturday, October 3, 2020 in her 100th year. Visitation will be held at Neidhard Young Funeral Home, 7401 Hamilton Avenue, Mt. Healthy on Tuesday, October 13 from 9-10 AM, followed by Mass of Christian Burial at St. Gabriel Church, 48 W. Sharon Avenue in Glendale at 11 AM. Burial will immediately follow at Gate of Heaven Cemetery.

The family of Doris Elaine Johnson created this Life Tributes page to make it easy to share your memories.

Doris Elaine Wlozinski is the second of three daughters born...

Send flowers to the Johnson family.