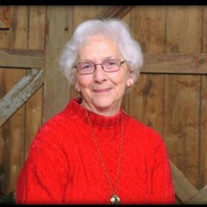 Dorothy Knapp, 92, of Milford, formerly of Finneytown, passed away on April 24, 2021, after a brief battle with kidney cancer. Dorothy was born on September 7, 1928 to Glenn and Lillian Boggess in Cincinnati, OH. She graduated from Withrow... View Obituary & Service Information

The family of Dorothy Knapp created this Life Tributes page to make it easy to share your memories.

Send flowers to the Knapp family.