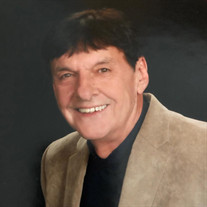 Cincinnati – Dwight E. Krapp, PhD, age 72, passed away on Sunday, February 28, 2021, at Hospice of Cincinnati. Dwight was born and grew up in North Dakota where he graduated from Buchanan High School. He went on to the University of North Dakota and earned a Bachelor of Science and a Master of Science degree in Speech Pathology and Audiology. In 1973 he moved to Cincinnati and was employed at the Cincinnati Speech and Hearing Center while obtaining his PhD in Audiology from the University of Cincinnati. After obtaining his doctoral degree he opened his private practice, Audiological Services of Cincinnati, where he continued until his retirement in 2014. Dwight had many hobbies, some of which began while he was at the University of North Dakota. He was a member of the Parachute Club and the Flying Club. He was a member of the UND Intercollegiate Flying Team where he competed nationally and ranked as one of the Top 25 Pilots in the nation. One of his greatest accomplishments was building his own plane, a Kitfox. Dwight started playing guitar in high school and was a member of a band, The Critics Choice. Dwight continued to play, write and record his music throughout his life. His family enjoyed listening to Dwight sing and play his guitar around the campfire on summer vacations. He was also an avid hunter and fisherman. Cooking and baking were other favorite pastimes. He enjoyed sharing his food with friends and neighbors. His many talents and abilities were admired by anyone who met and knew him. He is survived by his wife of 48 years, Ramona (Mathews) Krapp. Other survivors include his brother, Oren (Connie) Krapp; six sisters, Barbara (Gary) Cobleigh, Mary Jo(Ken Rode) Falck, Lorna(Robert) Traut, Joan (Bruce) Perleberg, Jean (Michael) Seltvedt, June Krapp-Detmer; brother-in-law, Ronald Holzwarth; and brother and sister-in-law Dan and Phyllis Delahoyde. He is also survived by many nephews, nieces, great nephews and nieces, and two Godsons. Dwight was preceded in death by his father and mother, Arnold and Ethel (Orner) Krapp; and his sister, Colleen Holzwarth; brothers-in-law, Joseph Detmer and Richard A. Boelter; niece, Amy Perleberg; and father and mother-in-law, Theodore and Nellie Mathews. A celebration of his life will be held at a future date in Cincinnati, followed by a service in North Dakota at the family’s convenience. Remembrances may be made to Kate’s Cupboard, c/o Trinity Lutheran Church, 1553 Kinney Ave., Cincinnati, Ohio 45231 or a charity of your choice.

Cincinnati &#8211; Dwight E. Krapp, PhD, age 72, passed away on Sunday, February 28, 2021, at Hospice of Cincinnati. Dwight was born and grew up in North Dakota where he graduated from Buchanan High School. He went on to the University of North... View Obituary & Service Information

The family of Dwight E. Krapp created this Life Tributes page to make it easy to share your memories.

Send flowers to the Krapp family.