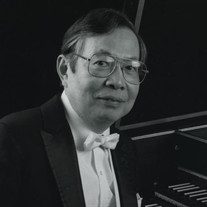 Eiji Hashimoto, a renowned harpsichordist and scholar of baroque classical music, died on January 14, 2021, at the age of 89. Mr. Hashimoto was born in 1931 in Tokyo, Japan. He gained attention as a musician at an early age, performing in the early 1940s as an organist on music programs aired by NHK, the Japanese national broadcast station. After graduating from the Tokyo University of Fine Arts and Music, he was selected for the Fulbright Program to study in the United States. He completed a graduate degree in music at the University of Chicago, then completed a further graduate degree in music performance at Yale University. At Yale, Mr. Hashimoto studied with Ralph Kirkpatrick, who had recently published a critical edition of 60 sonatas by Domenico Scarlatti. Mr. Hashimoto returned to Japan in 1964 to teach at the Toho-Gakuen School of Music and pursue a career as a performer. One of his concerts in Tokyo was attended by the French Cultural Attaché in Japan, and that led to the award of a grant from the French government, allowing Mr. Hashimoto to conduct musicological research in Paris. In 1968, while visiting the U.S. for harpsichord recitals, Mr. Hashimoto was invited by the College-Conservatory of Music at the University of Cincinnati (CCM) to establish a program for harpsichord, and he was appointed to the music faculty of CCM. As an Artist-in-Residence at CCM, he taught harpsichord and courses in the interpretation and performance of baroque music. Mr. Hashimoto also began a baroque performance workshop at CCM that evolved into the Ensemble for Eighteenth Century Music, which toured internationally and recorded several albums of works by the sons of J.S. Bach, Luigi Boccherini and Joseph Haydn. He remained a full professor at CCM until 2001, when he became a Professor Emeritus. As a performer and recording artist, Mr. Hashimoto was known for his technical brilliance and strict adherence to baroque performance practices. He concertized actively as a harpsichordist, both as a soloist and with ensembles and orchestras across the United States and in twenty-three countries, and he recorded eighteen albums on both Japanese and US record labels. Between 1968 and 1986, he performed numerous times with the Cincinnati Symphony Orchestra as a guest artist and soloist. Mr. Hashimoto was also recognized as a scholar of baroque music, and was twice awarded research grants by the Rockefeller Foundation for scholarly residencies in Bellagio, Italy. He published and edited books on performance practice and critical editions of music, including works by C.P.E. Bach, J.B. Loeillet and 190 Sonatas by Domenico Scarlatti—which continued the work of his mentor, Ralph Kirkpatrick. Mr. Hashimoto is survived by his wife, Ruth Hashimoto; his three children: Christine (Kirk) Merritt, Ken (Allison Dubinski) Hashimoto, and Erica Hashimoto; and five granddaughters: Katherine and Elizabeth Merritt, Scarlette and Sabina Hashimoto, and Naomi Hashimoto. A memorial service will be scheduled at a later date.

Eiji Hashimoto, a renowned harpsichordist and scholar of baroque classical music, died on January 14, 2021, at the age of 89. Mr. Hashimoto was born in 1931 in Tokyo, Japan. He gained attention as a musician at an early age, performing in the... View Obituary & Service Information

The family of Eiji Hashimoto created this Life Tributes page to make it easy to share your memories.

Eiji Hashimoto, a renowned harpsichordist and scholar of baroque...