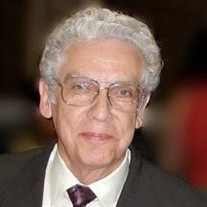 Howard Lee Elliott was born in Casey County, Kentucky, March 23, 1934, to Albert and Mina Elliott. Being the youngest of thirteen children during the depression in Appalachian Kentucky, he grew up in a farming family that was very poor, but rich in love and strong in faith. He appreciated all types of music, but especially loved Bluegrass and could play the guitar and mandolin very well. He and his sister, Gladys, would sing for the neighbors as they gathered on their porch on Sunday afternoons for impromptu Gospel Singings. A little known fact is that as a teen he played the mandolin with his hands and the guitar with his feet—but not in public per his mother! He married his sweetheart, Angie, in 1953 and after leaving the army, they moved to Cincinnati to raise their family and to work at Formica (and later on at Ford). On weekends he traveled with a gospel/bluegrass group called The Happy Travelers. They disbanded in 1960 and he ended up being part of the teaching ministry at the First Church of God in Evendale, Ohio, and singing with the Gospel Messengers. Feeling the call to pastor, in October of 1971 he accepted the call to pastor at Winton Road First Church of God and remained there as the senior pastor until he passed (over 47 years). Howard survived TB as a child, was shot by friendly fire in the army, had a major stroke, cancer, heart disease, several surgeries, diabetes, hundreds of transfusions, and high blood pressure and still lived to be 84 years old. He was jokingly accused of being “the energizer bunny.” It was certainly obvious that God had a purpose for him. He was an amazing man, a loving husband, a great dad, a wonderful and wise pastor, and a friend to everyone he met. Pastor Elliott always said he wanted to be known as a Faith Preacher. And we believe he was. He taught faith and lived faith. We are positive that he heard the words, “Well done, good and faithful servant; you were faithful over a few things, I will make you ruler over many things. Enter into the joy of your Lord.” Matthew 25:21. Visitation and Funeral will be held at Winton Road First Church of God, 6200 Winton Road, Fairfield, Ohio 45014. Visitation: Friday, November 2, from 3-8 PM. and Saturday, November 3, from 9:30-10:30 AM with funeral services to follow at 10:30 AM. In lieu of flowers the family requests that donations may be made to Winton Road Church Youth Group. Albert D. Hinkel, funeral director with Charles C. Young Funeral Home and Neidhard Young Funeral Home is assisting the family. Online condolences may be made at www.charlesyoungfuneralhome.com.

Howard Lee Elliott was born in Casey County, Kentucky, March 23, 1934, to Albert and Mina Elliott. Being the youngest of thirteen children during the depression in Appalachian Kentucky, he grew up in a farming family that was very poor, but... View Obituary & Service Information

The family of Howard Lee Elliott created this Life Tributes page to make it easy to share your memories.

Send flowers to the Elliott family.