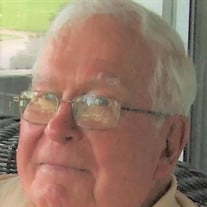 Karl Edward Lemmerman, Ph.D. May 30, 1923 - May 18, 2021(age 97 yrs. 11 mos. 18 days) Karl was born in Cleveland, OH to Edward and Ida Claflin Lemmerman, the youngest of four children. He was preceded in death by his parents, siblings Paul, Robert and Nan, his wife of 74 yrs., Kathryn who passed in 2020, and his oldest child, Keith, who passed in 2012. He is survived by his children: Kerry (Tim Baer) of Indianapolis, IN, Karl (Joanne) of Anchorage, AK, and daughter-in-law Terry (Keith) of Wyoming, OH; grandchildren: Neal (Cheri), Kelly (Eric), Angela (Chris), Julia (Simon), and John; plus 10 great grandchildren. Karl was originally from Lakeline Village, OH, east of Cleveland along the shore of Lake Erie. He graduated from high school in Willoughby, OH and continued his education at Oberlin College, located only 50 miles from home, where nine of his relatives had matriculated, including his two older brothers, Paul and Robert. Karl and Kathie met in 1942 while both were attending Oberlin. When Karl turned 21, he enlisted in the US Navy. He completed the Naval Electronics Training Program (ETP) stateside and served aboard LSM-457 in the Pacific and China from 1944 to1946. At the war’s end and discharge, Karl returned to Kathryn and his Oberlin studies using the GI Bill. The couple were married in Oberlin’s Fairchild Chapel on July 20, 1946. Kathie graduated from Oberlin College in 1946 and the couple lived in married student trailers on campus (needed to accommodate the large influx of returning married veterans) until Karl graduated in 1947 (class of ’45) with a degree in chemistry. They moved to New York where Karl continued his education at Cornell University, leaving Ithaca, NY, with a Ph.D. in physical chemistry in 1950. In 1951, the couple moved to Cincinnati, OH where Karl was hired by Procter & Gamble to work at their Miami Valley Laboratories which were under construction at the time. He worked that year as a research chemist at ITC and transferred to MVL when construction was completed in 1952. That same year, the couple moved into their home for the next 64 years in Mt. Healthy, OH. In 1959, they joined with four neighborhood families and built the Compton Swim Club where all the kids learned to swim and many hours were spent socializing and relaxing. Karl bought a used ’64 Corvair as a carpool/work car which started a 50-year affair with Corvairs and the Cincinnati Corvair Club. He enjoyed working a large vegetable garden, growing a variety of apples, and making cider using his rebuilt 100-year old press. He also volunteered for Mt. Healthy Civil Service Commission and Planning Committee. After a 36-year career in research with P & G, Karl retired in 1988. Then, for over 20 years, the couple traveled extensively, having tremendous success and fun with the Elder Hostel (now Road Scholar) program, both in the U.S. and abroad. They participated in over 50 Elder Hostel programs and met many new and old friends in their travels. In 2015, they sold the family home in Mt. Healthy. Ohio, and his last Corvair (a ’69 Monza convertible), and moved into Evergreen, a senior living facility in Cincinnati, OH. As per his wishes, there will be no visitation. Following cremation,there will be a private service. In lieu of flowers or cards, please donate to the JDRF (Juvenile Diabetic Research Fund) 8050 Hosbrook Rd. Suite 314 Cincinnati 45236. Condolences may be expressed to the family at neidhardyoungfuneralhome.com

The family of Karl Edward Lemmerman Ph.D. created this Life Tributes page to make it easy to share your memories.

Send flowers to the Lemmerman family.