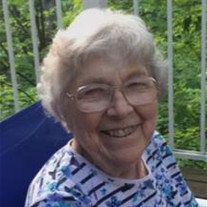 BLUM, Marian G. (Schneider), age 91, of Mt. Healthy, passed away on Monday, June 12, 2017. She was born on December 9, 1925 to George and Wilhemina (Ries) Schneider in Cincinnati OH. She is survived by her loving husband Vierling, of 66 years; three daughters, Mary (Frank) DeSalvo of Ft. Wright KY, Anne (Jim) Kreider of Sugarcreek Township OH, and Betsy (Dan) Pelzel of Loveland OH; one son, Bill (Sue) of Griffin GA; 3 granddaughters, Leah Pelzel (Ethan) Nash of Indianapolis IN, Libby Pelzel of Loveland OH, Grace Kreider of Sugarcreek Township; and one grandson, Alex Kreider of Sugarcreek Township; sister-in-law Francis (Morrow) Schneider of Champaign IL; and numerous nieces, nephews, and cousins. Marian attended Withrow High School in Cincinnati, class of 1943, and graduated with a degree in education from the University of Cincinnati in 1947, where she was a member of Alpha Gamma Delta Sorority. She served on Mt. Healthy City Council for 6 years and retired as a school teacher from Assumption Catholic Grade School in Mt. Healthy. Marian was a member of the Ohio Teacher in Space program as a volunteer to fly on the ill-fated Challenger mission. She served as curator of the Mt. Healthy Historical Society for many years. Marian was an active member of Assumption Parish as a soprano in the choir, a volunteer on various committees, and a lector. She continued her lector duties as a member of the Catholic community of Evergreen Retirement Center. She also was involved in the choral group and book club at Evergreen. Marian loved Jeopardy, seldom missing an episode, and was an avid crossword puzzle fan. Marian is preceded in death by her parents, her parents-in-law (Henry and Edmunda Blum of Mt. Healthy), her brother Jack, and her sister Virginia and brother-in-law Charles Herweh. Visitation Wed 5-8pm at Neidhard-Young Funeral Home in Mt. Healthy. Mass of Christian Burial Thur 10am at Assumption Church; burial will follow at St. Mary’s Cemetery in Mt. Healthy. In lieu of flowers, the family requests donations to Assumption Church or the Mt.Healthy Historical Society.

BLUM, Marian G. (Schneider), age 91, of Mt. Healthy, passed away on Monday, June 12, 2017. She was born on December 9, 1925 to George and Wilhemina (Ries) Schneider in Cincinnati OH. She is survived by her loving husband Vierling, of 66 years;... View Obituary & Service Information

The family of Marian Blum created this Life Tributes page to make it easy to share your memories.

Send flowers to the Blum family.