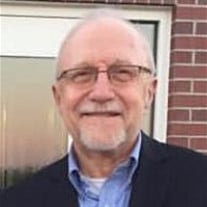 Mark Barnaby Sackett, age 73, passed away peacefully on January 2nd, 2020. He was born November 2nd, 1946 in Cincinnati Ohio to the late Charles Edward Sackett and Emma Louise Sackett (Goodwin). In addition to his parents, Mark was preceded in death by his brother Sean Roger Sackett. Mark is survived by his devoted wife Kathy, and his older brother William Ross Sackett. He was a loving father to Marcella Jane Sackett Howard (Mike), Dwight Michael Sackett, Kathleen Ann Sackett Jump (Steve) and a proud grandfather to eight, and great grandfather to five. Mark was a graduate of Kings Mills High School in Cincinnati, Kessler Technical Training Center for Communication support at Kessler Air Force base in Mississippi, and was a graduate of the Tactical Air Command Officers Leadership School prior to serving his country in the United States Air Force. His post military career involved machine service, and on that basis, founded his company Automated Machinery, in 1982. Mark was a devoted church member, active in many of the ministries at Christ Church Cathedral that serve those in our community who are food and housing insecure. He was a co-founder of the 5000 Club dinners, volunteered his time with IHN (Interfaith Hospitality Network), and Plumb Line, all outreach services that help and support the most vulnerable people in our community. He served on vestry and was also active in the mens bible study. Additionally he served on the stewardship and outreach committees. He was also recently inducted into the Society of St. Simeon and St. Anna for exemplary Christian service. In his leisure time he enjoyed running, and competed in over 50 marathons including all of the Flying Pig marathons up to their 20th anniversary. He competed in two Boston marathons and helped train with the Step Forward Group (City Gospel Mission) in 2012. Mark’s leadership and dedication helped to make The Cincinnati Scholar House project a reality. This home which will serve low income parents and their children and will help break the cycle of poverty two generations at a time, will open their doors in Walnut Hills this spring. A celebration of life service will be held at Christ Church Cathedral at 11am on January 18, 2020. In lieu of flowers, memorials may be made to The Cincinnati Scholar House, in care of Christ Church Cathedral 318 E 4th St, Cincinnati, Ohio 45202

The family of Mark Barnaby Sackett created this Life Tributes page to make it easy to share your memories.

Send flowers to the Sackett family.