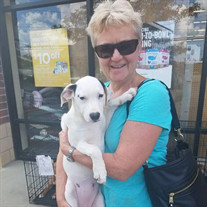 Mary Beth Sauer of Cincinnati, Ohio, died unexpectedly Monday, September 16th. Mary Beth was born August 12th, 1957 in Middletown, Ohio, a daughter of the late Vincent and Margaret Lutz. She was a graduate of Russell High School in Kentucky and graduated from the University of Kentucky with a degree in Metallurgical Engineering. Mary Beth worked at Ethicon Endo-Surgery for many years where she was a passionate leader that influenced and mentored many colleagues. Since retiring, she served as a consultant at Standard Bariatric and volunteered at iSPACE - The STEM Learning Place. Her passion for serving others extended to organizations such as the American Cancer Society Hope Lodge, United Way, and Freestore Food Bank. A supportive, caring friend, Mary Beth put a smile on everyone’s face and impacted the lives of everyone she crossed paths with. She welcomed others with open arms and infectious laughter. She enjoyed the outdoors, traveling, cooking, spending time with family and friends and dearly loved her dog Ruby! Recent life highlights included a safari in Africa, serving as a trail angel and completing portions of the Appalachian Trail with her close friend Mike, conquering the summit at Mt. Katahdin. She was preceded in death, in addition to her parents, by her sister Barbara Karig (Richard). She is survived by her daughter Anna Charles (Andrew) of Hamilton, OH; two brothers Tom Lutz (Jan) of Ann Arbor, MI and Robert Lutz (Suzanne) of Tallahassee, FL; two nephews Steven and Nate (Paige) and niece Laura. Visitation to honor Mary Beth will be held at Neidhard-Young Funeral Home, 7401 Hamilton Avenue, Cincinnati, OH 45231 from 2:00 to 4:00 PM on Saturday, September 28th. In lieu of flowers, contributions may be made in Mary Beth’s honor to iSpace. https://ispacestem.org/donate-now/

The family of Mary Beth Sauer created this Life Tributes page to make it easy to share your memories.