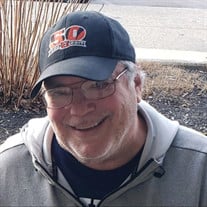 Kozlowski Raymond W. Jr., Beloved husband of Carol (nee Turner) for 51 years. Devoted father of Heather (Gregory) Peck, Lori Kozlowski, Raymond M. Sr., (Cyndi-Huisman-Muncy) Kozlowski, Sarah (Joey) Fay. Brother of Thomas (Daria) Kozlowski. Dear grandfather of Kylen, Natalie, Raymond M. Jr., Alexis, Lydia, Grace, Leland, Zoey, Chloe, Adam and Alex. Also survived by many in-laws, nieces and nephews, great nieces and nephews, cousins and lifelong friends. Proceeded in death by his parents Raymond W. Sr. and Natalie (Sleboda) Kozlowski, and his in-laws Charles and Helen (Benner) Turner. Raymond passed away peacefully as a result of Covid on February 17, 2021 at the age of 72 with his family by his side. Raymond was born on January 3, 1949 in Erie Pa. He was a graduate of Technical Memorial High School, where he met his high school sweetheart, whom he later married. Shortly after high school he joined the United States Navy, where he served for 4 years. He was a proud veteran. Shortly after leaving the Navy he worked for GE Locomotives in Erie. In 1979 he was transferred to GE Aircraft Engines in Cincinnati where he would ultimately retire. Raymond was a resident of Colerain Township. He enjoyed going to the casino, taking long rides, and spending time with his family, especially his beloved grandchildren. He never met a stranger that he wouldn’t talk to and will be missed by all that knew him. Visitation will be Wednesday February 24, at Neidhard-Young Funeral Home 7401 Hamilton Ave. Mt. Healthy from 5-8 pm. Mass of Christian burial will be at St. John Neumann church 12191 Mill Rd. (45240) on Thursday February 25 at 11:00 am. Interment will be at Arlington Memorial Gardens. A celebration of life service will be held in Erie, Pa at a date to be determined. In lieu of flowers donations can be made to Down Syndrome Association of Greater Cincinnati 4623 Wesley Ave. Cincinnati, Oh 45212

The family of Raymond W. Kozlowski Jr. created this Life Tributes page to make it easy to share your memories.

Send flowers to the Kozlowski family.