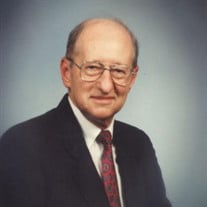 Robert E. Hamilton Bob was born in Bethel, Ohio on September 4, 1932 to Raymond & Rose Hamilton. He grew up there and married Faye Patrick, his high school sweetheart on March 20, 1952. Bob served in the USAF during the Korean war doing what he thought was a boring job in Tokyo, Japan. After returning home he learned drafting by going to night school and soon got a job with his new skills. Unfortunately, not long after buying his first home in 1960 he was laid off. But it wasn’t long until he found his place at the patent law firm of Wood, Herron and Evans where his skills deepened. He became a respected invention illustrator whose drawings were used on display at the US Patent office as examples of how to illustrate a patent application. Bob retired from his long career in 1997 and used his new freedom to pursue his love of woodworking by building heirloom quality wood furniture. During his lifetime he devoted his energies to more than his career and his hobbies. He served Jesus and his church as an Elder for both Amelia and Mt. Orab Churches of Christ. He was a skilled and beloved teacher of the Bible to both adults and young people. He was the driving force behind the development of Bible Bowl in Southwestern Ohio, taking teams to National Tournaments and even winning some. But more importantly to him, embedding the love of God’s Word in the hearts and minds of teenagers who credit him with their spiritual growth. Later in his life he served White Oak Christian Church by helping with their Bible Bowl program and teaching the Homebuilders Class. Then, after moving into the Christian Village of Mt. Healthy he served by visiting the grieving, talking with the lonely, welcoming the new arrivals and praying with the hurting. But his first priority was always his family. His love, support, instruction, example, and devotion never wavered. He was our rock. Bob passed away early on Saturday, April 24, 2021. His younger brother Paul Hamilton preceded him in death, but he leaves his loving wife Faye (nee Patrick) Hamilton, his son Lloyd (Kathie) Hamilton, daughters Rhonda Graham and Jennifer “Ginger” (Bob) Goettke, grandchildren Liz (Trent) Witkop, Kate (Timm) Combs, Chris (Mary) Graham, Becky (Josh Clay) Graham, Mike (Kristin) Graham, Sara Goettke, and 7 great-grandchildren. Visitation will be at White Oak Christian Church, 3675 Blue Rock Road Cincinnati, Ohio on Thursday from 4:00 to 6:00 P.M. and also on Friday from 10:00 A.M. until the funeral service at 11:00 A.M. Interment will be at 2:30 P.M. at the Tate Township Cemetery in Bethel, Ohio. In lieu of flowers, donations may be sent to https://christianvillages.org/donate/

Robert E. Hamilton Bob was born in Bethel, Ohio on September 4, 1932 to Raymond & Rose Hamilton. He grew up there and married Faye Patrick, his high school sweetheart on March 20, 1952. Bob served in the USAF during the Korean war doing what... View Obituary & Service Information

The family of Robert E. Hamilton created this Life Tributes page to make it easy to share your memories.

Send flowers to the Hamilton family.