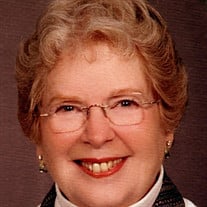 Vera Eleanor Gustafson (nee Maier) went to be with her Lord on December 13, 2017 after a lengthy illness. She was preceded in death by her parents Emil and Irma Maier, her sisters Ruth Kuyper and Lois Lively, and a great grandson Graydon Koch. She is survived by her loving husband of 65 years, Harold “Gus” Gustafson, daughters Susan (Bill) Koch and Janet (Bruce) Boyd, grandchildren Andrew (Olivia) Koch, Joshua (Meredith) Koch, Ian (Megan) Boyd and Allison (Cameron) Hulse. Additionally Vera was blessed with 7 great grandchildren, Caroline, Sylvie and Oliver Koch, Graham and Grace Koch and Lucas and Liam Boyd. She is also survived by a large extended family comprised of nephews, nieces, their children, many friends and former employees of Assured Micro-Services Inc. It would be difficult to describe Vera and her impact on the lives of those around her with just a few adjectives. She was a wonderful wife, mother, friend, cook, gardener, nurse, business woman, and perhaps most of all, an empathetic listener. In 1974 Vera embarked on a business venture with Gus and formed Assured Micro-Services, a document imaging company. It was her intention to stay with the business until it got off the ground, but that intention turned into a 32-year career. It was during this time that Vera and Gus were able to do extensive traveling to almost all the continents. This was quite an accomplishment for a graduate of Jewish Hospital School of Nursing whose original career goal was to be a registered nurse. Vera was also active at College Hill Presbyterian Church with numerous organizations including Sunday School and the Young Folk singing group, which she and Gus chaperoned on a summer tour of the Midwestern and southern states. Vera’s Thanksgiving feasts were the stuff of legend. Her turkeys usually exceeded 22 pounds, and were cooked to perfection. Her table was a work of art, which is no mean feat when preparing for 25 to 30 people. Vera always had time to listen without judgement or criticism. She was an excellent sounding-board and conversationalist who would always stop what she was doing to talk to someone who wanted her counsel or just to talk. Last of all Vera was a fierce defender of her family. We always knew that Vera had our back, no matter what the circumstance. Along with Gus, Vera made it a point to attend every sporting event, play, concert and dance recital of not only their own children, but of their grandchildren and great grandchildren, as well. Vera truly loved her family and her family truly loved her back. Visitation will be held at College Hill Presbyterian Church 5742 Hamilton Ave. on Monday, Dec. 18, 2017 from 11 AM until time of Funeral Service at 12 Noon. In lieu of flowers, donations may be sent to College Hill Presbyterian Church or Hospice of Cincinnati.

Vera Eleanor Gustafson (nee Maier) went to be with her Lord on December 13, 2017 after a lengthy illness. She was preceded in death by her parents Emil and Irma Maier, her sisters Ruth Kuyper and Lois Lively, and a great grandson Graydon Koch.... View Obituary & Service Information

The family of Vera Eleanor Gustafson created this Life Tributes page to make it easy to share your memories.

Vera Eleanor Gustafson (nee Maier) went to be with her Lord on...

Send flowers to the Gustafson family.